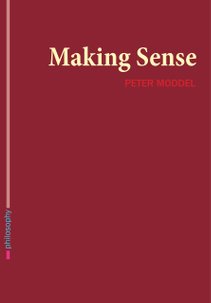 An interview about the book:

The Mind’s Activity and the Influence of Intent

Making Sense is a philosophy book that  grows out of observation rather than ideas. Examples chosen from first-person experiences of mind activity lead to the realisation that, within what is generally accepted as understood, much remains unexplained.

The word consciousness has two distinct and mutually exclusive meanings. This is presented in the vocabulary key in the book’s preface and is a distinction that brings a degree of clarity to all the topics covered in this book.

The first chapter lays the ground for a description of the two-fold function of mind: one conscious, the other non-conscious. The distinction between denotation and connotation is helpful in defining these complementary activities of mind. Once this dual function is understood, a detailed description of the process of concept formation becomes possible. With this understanding, other phenomena are defined and described, as for example, the temporal present and the significance of the word now.

This same dual function can be observed in other ways, as later chapters show.  For example, the second chapter traces the movement involved in sensory perception, showing it also is a two-fold function: one conscious and the other subliminal. In this work, expanded consciousness is the expression used for the unconscious activity of mind. The dual movement in sensory perception becomes obvious when the significance of periphery is taken into account – spatial periphery in vision contrasted with temporal periphery in hearing. The detailed description of seeing and hearing from a first-person view is helpful in understanding other features of sensory perception, such as how and why colour vision arises.

In the course of these discussions, it becomes evident that an organising function, active in all we do and all we understand, has simply been omitted from the description of what is. This function, it turns out, is what is commonly referred to as intent or intention i.e., an engagement to produce an outcome. (This is not the formal term intention found in phenomenology and used to signify something quite different.) Understanding what intent is and how it relates to all that is known is the thrust of the mid-section of this work and it includes descriptions of both the material world and of non-material presence. A discussion of form and matter opens this theme and it includes a presentation of the inverse relation between entropy and intent.

Intent is an inductive process and what this signifies is presented in a separate chapter. Despite the fact that induction is broadly assumed to be a causal process, it is non-causal and differs fundamentally from causality. As such, it offers another way of understanding interactions.

Recognising intent for what it is – a function that is independent of mind – allows for a meaningful description of I or self. How it is that I is ever a subjective function is told in chapter 7­. This chapter draws together much of what was discussed up to this point and shows that intent, although fully independent of consciousness, is still the expression of a personal subject. The intuitive sense of self that initiates our use of the words I and me can also be described in purely grammatical terms. To realize what we acknowledge when we say “I” requires a major shift in our thinking and results in a view of self as a dynamic function and not as an entity present in the physical world. The ever-elusive phenomenon of self is present in the correlation producing all that becomes intelligible. The space and time coordinates of the embodied self are merely the anchor point of something that extends well beyond what we usually consider ourselves to be.

The movement of I implies the freedom to create an outcome and how this takes place is shown in the final chapter where an unsuspected effect of consciousness is noted, namely, that consciousness neutralizes the influence of intent. The result is a remoulding of patterns of behaviour. For this to be, behaviours do not need to enter consciousness. Our freedom to choose is rooted in the interaction between consciousness and intent.

In this synopsis, it is difficult to show the logic involved in the arguments however, with the examples quoted in the text, the reader is introduced step by step into this novel understanding. One central conclusion is that all that appears objective has its source in a personal, subjective act.

The book is divided into nine chapters placed between a preamble and a final epilogue. From time to time the text is suspended, allowing for an interlude that deals with a subject that moves off at a tangent to the main text. These interludes  contain items from the arts, from cultural history, etc., or they may simply relate an anecdote.